COVID-19 and the slow motion apocalypse we find ourselves in aside, it's still been a good couple months in terms of publishable work for me.

I had the Scary Monsters Magazine article, and I have two stories coming out in the next couple of months in various and sundry anthologies. I had a burst of writing mania back in the fall of last year... and turned the stories around pretty quickly in terms of publishing.

The first up is progressing pretty well.

It's an anthology by Transmundane Press entitled On Time. They're publishing a story of mine called 'The Unloved Dead'. We're moving pretty quickly on edits and it should be out within the next couple of months. 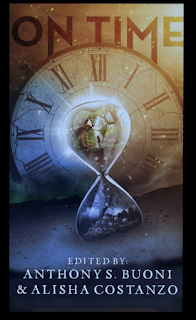 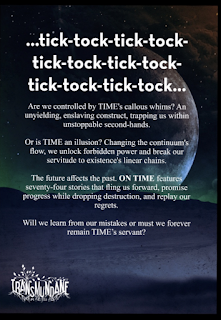 Next up is an  anthology entitled Fearrington Road by Dark House Publishing. Contracts have been signed, and what not... and it was supposed to be published at the end of last year; but I've heard no updates, other than a Facebook post on their authors' page mentioning a hard drive crash. I plan to follow up soon for any kind of an update, but I'm assuming they've pushed production back. This accursed plague has probably not helped with that much either. The story I'm having published in this antho is a Lovecraftian story that I wrote entitled "The Raven's Lookout Regulars". This story was a labor of love from me. I absolutely loved the story and it's characters, and I shopped it for over a year. I knew it was a good story, and I just needed to find someone who loved it as much as I did. Hopefully, Dark House will move on the anthology soon... so I can share it with you, dear readers.

So that's where I'm at. I'm working hard to try writing more (and part of that may be driven by my sudden brush with and glimpse at the mortal existentialism of incurable illness, but, hey... whatever, man. In the meantime, I'm trying to get over the deep, biting disappointment of this apocalypse having exactly zero fucking zombies in it.

This is the worst. Apocalypse. Ever.

In the meantime, cover up, shelter in place, and stay healthy! 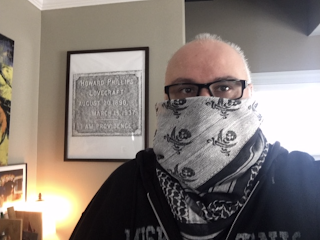 Send this site to a fiend

Dr. Zombie
D. Allen Crowley is an author and poet who lives in historic downtown Willoughby OH. He lives there with his beautiful wife, two children, a dog of questionable breeding and intelligence, and a ridiculous number of cats. He is the author of two novels: "North Coast Gothic: A Grim Fairy Tale" and "A Darkness Within". Mr. Crowley has also had short stories and poetry published in both print magazines and online magazines. He also publishes a creative blog under the pseudonym of Doctor Zombie. His blog has been featured on Cleveland.com and he wrote the October cover story for the Cleveland Scene Magazine... He is also an evil genius who will someday make you one of his undead zombie minions.